All Grown Up: 10 Dinner Party Games for Adults 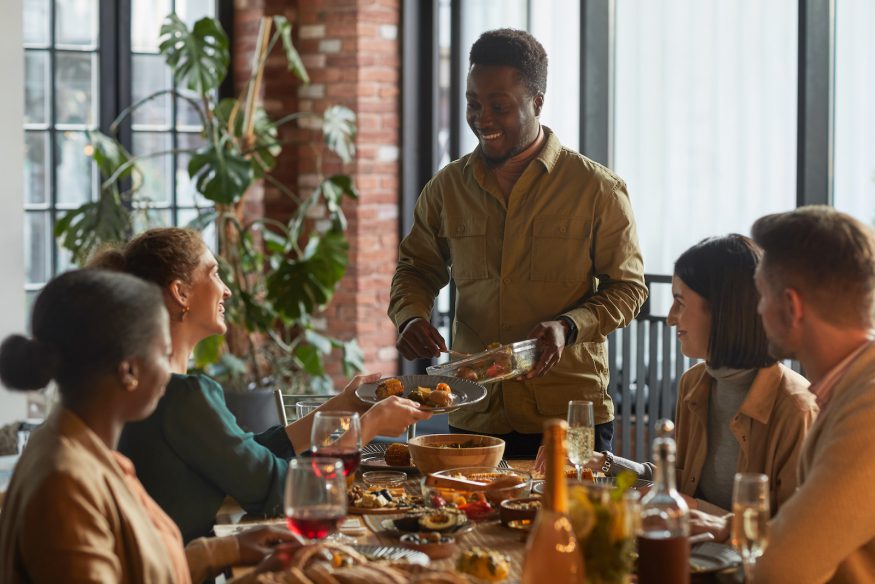 If you’re hosting a grown-up soirĂ©e, these dinner party games for adults will get everyone talking (and might elicit some very adult conversations). Play a game as an icebreaker while everyone nibbles on appetizers, or save the fun until after dessert when everyone has dined and is feeling fine.

Here are our favorite dinner party games for adults â€” each guaranteed to make the conversation flow like wine.

These fun party games are great conversation starters. Pick one or a few to try at your next dinner party. (Psst … they also make great activities for birthday party dinners, and they might encourage the birthday boy or girl to share the details of their storied life.)

1. Never Have I Ever

This drinking game doesn’t require any special equipment â€” just a long memory and your favorite adult beverage. (We recognize that these two things aren’t always compatible, but go with it.)

After each person says their “Never have I ever,” any player who has done the activity in question will lower one of their five fingers and take a drink. The first player to put all five fingers down is the loser. (Although, if you ask us, they’re winning at life.)

If you don’t want to use fingers to keep score, you don’t have to. You could also play until the first player finishes their drink or until everyone is feeling a little bit tipsy. You never know what secrets might come out, so be careful not to play this one at your next office party!

2. Two Truths and a LieÂ

Another adult party game that’s so easy you can play it over your dinner plates, Two Truths and a Lie only requires a drink and an active imagination.

Now the second player becomes the first. He or she tells two truths and a lie to the next person in line. Round and round you go.

Would You Rather is a getting-to-know-you game, and it’s another one where you’ll go around the dinner table.

You can go around the table and have everyone answer, or the person asking the question can pick one person to answer. Have someone different ask the next question, and keep going around until everyone has asked and answered at least once. 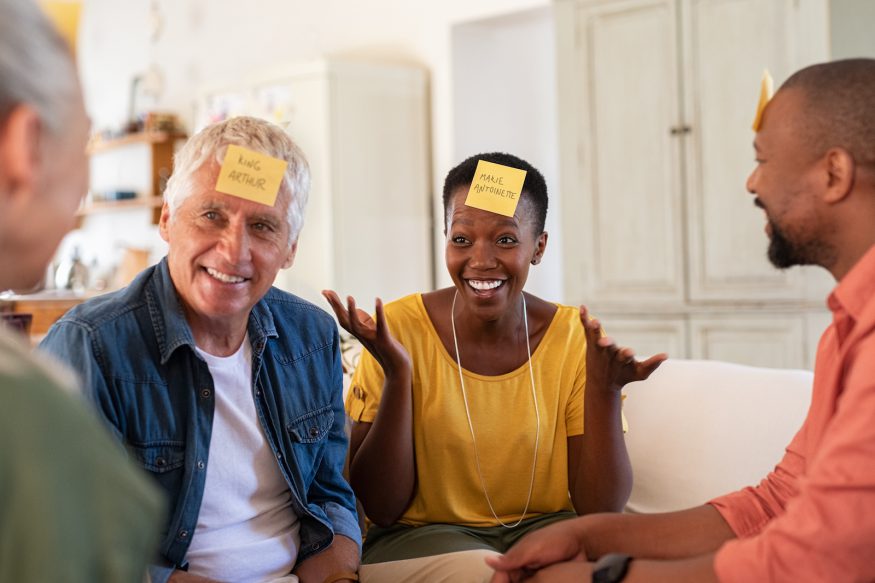 This is a great game for large groups. The only thing you need to play is a stack of Post-it Notes and a pen. Write the name of a famous person on each Post-It Note and stick one note to each guest’s back or forehead. (Note: The forehead is easier for other guests to read, but the back works better for bathroom breaks where guests might catch a glimpse of their forehead in the mirror.)

Guests will go around the room and speak to each other as if they are the famous person whose name appears on their sticky note. For example, if your Post-it said “Jennifer Aniston,” another guest might make a comment like, “I loved you as Rachel.” In order to win this guessing game, you have to correctly guess the name written on your Post-it Note.

You can offer a prize for the first person to guess what’s on their sticky note, or you can keep playing until everyone has guessed correctly, or both.

The party kit comes with characters that you’ll assign to each of your guests. On the night of the party, you’ll act out the story in your murder mystery kit. The murderer will remain a mystery â€” even to you â€” until the end of the game. Before the big reveal, take a break so everyone can try and solve the whodunit. 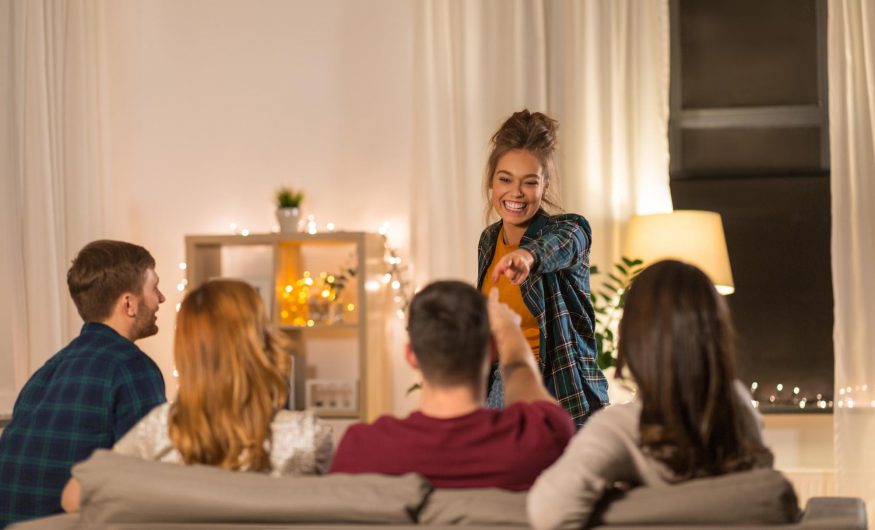 This is one game that all your guests will be familiar with. Split into two teams, and have each team write down the clues they want the other team to act out and guess. Place the clues in two different hats (one for each team), and take turns â€” with team one acting and guessing while team two remains silent.

Set a timer for three minutes and let team one act out and guess as many items as they can in that time frame. Next, turn the floor over to team two so they can act and guess.

Similar to charades, Pictionary can be played with two teams â€” the only difference is that instead of acting, they’ll be drawing. Each team will try to draw and guess clues written by their rival team. You can make things easier by buying the Pictionary board game and using the clues provided.

For a modern twist on Pictionary, try the Telestrations board game. This game is perfect for playing around the dinner table. After you’ve cleared away the dinner plates, hand each guest a pen and paper. Have everyone choose different clues and sketch them out at the same time. Then pass your papers to the person on your left.

Everyone will write down what they think is happening in the drawing they just received. Then, you’ll share all the drawings and guesses with everyone at the table. This is the funniest way to play Pictionary, and it’s sure to bring on a few belly laughs. (Don’t worry, belly laughs are good for digestion.)

In this card game, you’ll pick a card with a phrase written on it. Your goal is to get the other players to guess what’s written on your card before time runs out. (Spoiler alert: Itâ€™s not as easy as it sounds.)

Not only are you not allowed to say any of the words in the phrase, you also can’t say several off-limits words that will be written on the card. If you say one of the off-limits words, you automatically forfeit the round.

An example of Taboo in action might go like this: You pull a card. You want the other players to guess “Statue of Liberty,” but you’re not allowed to say “statue,” “liberty,” “New York,” “France,” “island,” “harbor,” or “torch.” You’ll end up describing the phrase in a roundabout way that keeps everyone guessing.

This irreverent card game is all about knowing your audience. It contains two sets of cards: question cards and answer cards. Each player gets 10 answer cards.

One person starts the game by picking a question card. The other players choose an answer card from their hand and pass it to the person who asked the question. The asker will choose his or her favorite answer, and whoever provided that answer will win the round and ask the next question.

Cards Against Humanity describes itself as “a party game for horrible people,” and the answers range from racy to X-rated. This game can be a lot of fun, but it’s not for the faint of heart. 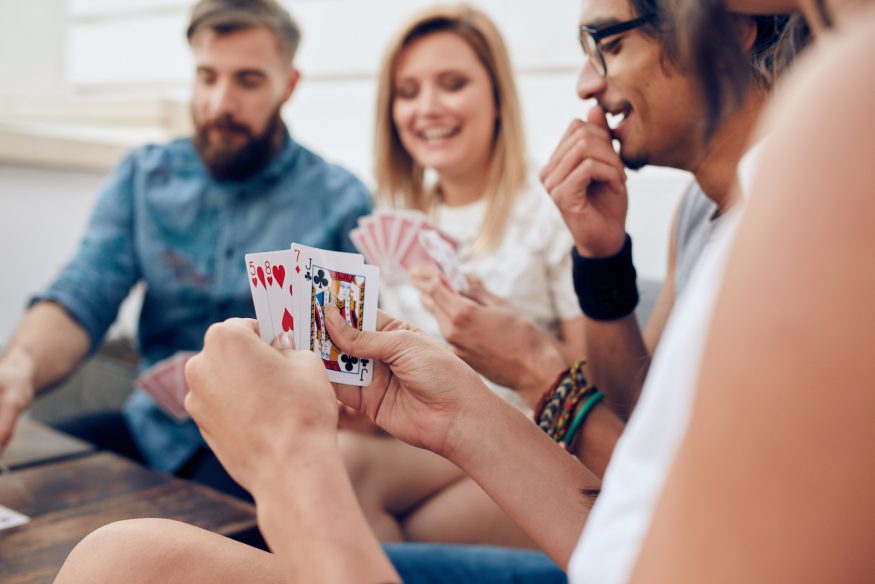 Don’t underestimate the power of a simple deck of cards. A game of poker, hearts, or B.S. can be as much fun as any of the games on this list. Choose your favorite classic card game, or opt for a round of Ring of Fire, a drinking game you play with a basic deck of cards.

You don’t have to go full game night to add a little extra fun to your dinner party. Choose one of the simple game ideas above and use it as a conversation starter.

Once everyone has gotten familiar, you may want to leave the games behind to enjoy some fine dining with your friends. Or, you may be having so much fun that you never want the games to stop. Luckily, many of the options don’t require any equipment, so at the drop of a hat, you can start up a new dinner party game for adults. It’s just one way to make party planning easier.

Another way: Send out digital invitations. Digital dinner party invitations go straight to guests’ inboxes. They allow you to collect RSVPs and even ask survey questions, like whether your guests have food allergies or special dietary requirements. You can also ask if they have any favorite games to help you decide. With this secret weapon, your dinner party is sure to be a success.